You’re not likely to find a banana seat on a high-end road or mountain bike these days, so this review is poignantly useless, although I’d like to think there’s an attentive product manager out their in the tundral wastelands of the bike industry willing to put his or her career on the line to reinstall the banana seat atop the seatpost of our happy destiny. The marketing speak generated by such a bold move capers and dances in my imagination, “scientific studies” showing the aerodynamic advantages of bananas plastered across the pages of your glossy cycling journals.

And while we’re talking about science, let’s just get something out of the way right from the start. The classic banana seat is NOT banana-flavored. Nor does it smell like bananas. You don’t have to run an experiment with a massive sample size to know these things. In modern science the methods are sometimes unconventional, but the data don’t lie.

Having missed the top two items from the feature list of any product named after a fruit, it’s worth asking, what exactly were the makers of the banana seat going for? What is this thing designed to do? 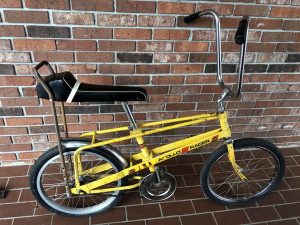 I see two clear advantages of the unique curvature and space allocation. First, for those riding ape hanger bars with handbrakes (as was highly desirable at one time, circa 1977), the banana seat provides the perfect ramp to launch the rider headlong betwixt the bars, over the front wheel, and off into their next adventure.

The other obvious advantage is the room to bring a friend or sibling along on the ride. This stunt requires the passenger to make the agonizing decision about where to hold on, shoulders to keep it strictly friendly, hips for a bit better stability, full hug for maximum safety/intimacy, or the inadvisable back of the seat itself, this latter choice allowing the hanger-on to avoid any inter-personal ambiguity but also divorcing them from the main fulcrum of the bike’s steering.

A secondary albeit more important concern then is where the passenger’s feet go. The banana seat thrived in a world before BMX pegs, and the designers of the seats failed to really consider the safety of the +1, so that left any would be hitchhikers with the difficult task of keeping their feet on whatever bits of axle extended beyond the confines of what was probably a 1/2-inch hex nut. As a desperate and dangerous alternative, they could simply leave their feet dangling, a choice that demonstrates a spiteful disregard for the ultimate health of the human undercarriage, regardless of equipment therein contained.

The OED, not coincidentally has the exclamation “holy f*$%ing ouch!” appearing in the English language right around the same time the banana seat found widespread acceptance as a way to sit on a bicycle.* 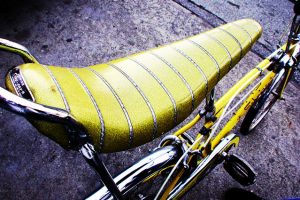 My careful description of foot placement options above notwithstanding, the outcome of riding along on a bike equipped with a banana seat often resulted in, after encountering the suddenly everywhere “killer bump,” some part of the passenger’s foot slipping into the spinning wheel, bisecting a set of spokes, and then sliced with great force as the foot in question fails to pass between the chainstays. Woe betide the neighborhood friend who climbed aboard with no shoes on. Most of our toes are vestigial, but that doesn’t mean you wanna see yours laying forlorn on the hot summer sidewalk, independent of your foot.

It could be that the minor disadvantages I’ve outlined here were the key factors in the banana seat’s eventual obsolescence, and I think that’s too bad. A little danger does a body good, in my book, and it’s hard to argue with the long, shallow, sloping curve of a classic banana for style. If this particular bit of componentry doesn’t make a calculated comeback in the design chambers of the global cycling industry, then we can at least hope for some splinter junta of Brooklyn hipsters to bring it back to semi-popularity at arbitrarily high prices.