Now that we’ve done this schtick a few times, maybe it’s worth talking about why useless reviews need to be written. It’s not because the products highlighted need to be evaluated. Even before you start reading, you know the punchline.

Most of these things are iconic, although maybe not for the reasons that present themselves prima facie. What we’re doing is really more like homage/parody, homody? We’re skewering bike fetishism, but also letting some of the air out of the conventional review format. At the same time, we’re appreciating stuff, qua stuff, because at least half of cycling, as a hobby, is about collecting the bits and pieces that tell fellow cyclists that you’re a gray Nike-wearing member of the death cult. Even, and maybe especially, when that stuff isn’t very good in real practical terms. 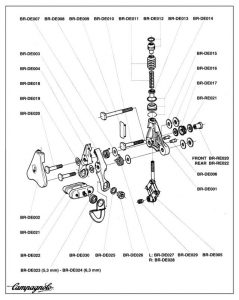 And so, what could be more useless than a review of a brake you can’t get anymore and that was itself useless, even when it was brand new and sitting coyly on the shelf at your local bike shop? Today we’ll talk about the Campy Delta brake, not as a brake, because that implies some practical purpose, such as stopping, that these brakes did not really intend to fulfill, but rather as the ne plus ultra of bike fetishism.

The first time I saw a pair of Campy Deltas live and in person, their aluminum casings glimmering in the refracted light from the broad shop window, was in a display case at Velosmith Bicycle Studio, north of Chicago, the native habitat of one Radio Freddy, aka Tony Bustamante, a second generation shop owner and the son of one of Chicago’s original cycling mafiosi (not really a criminal), Alberto Bustamante. Alberto is a kind and affable man, though, in his day, he was a killer on the bike. Perhaps this pair of Deltas came from his original shop, or perhaps they were left behind after the visit of extraterrestrials from the planet Italy.

By the time that particular pair of Deltas had been placed inside the glass case at Velosmith, it had filtered down through two lifetimes of bike fetishism, Alberto’s and, latterly, Tony’s. As I recall, one brake was leaned at an angle across the other there beneath the glass, still out of reach, as the Deltas had always been for most cyclists by virtue of both scarcity and price point. In this case (double entendre) even the display of the objet d’art had been designed to maximize the aesthetic impact and underline the unicorn nature of this component/sculpture.

When I informed Tony that his prized pair of Deltas were the first I’d ever seen, he laughed and told me, “I have made peace with the Delta brakes. From the standpoint of both rider and mechanic they were terrible. They don’t stop, and they are a terror to set up. But, to view them as just a brake set would be to miss their importance. Like so many designs of the 1980s, the future had arrived. This was our Macintosh. This was our iPod, an approachable design that caught the eye of the masses, for a brief moment, before Lemond even won the tour.”

Speaking of the trauma resulting from working on these things, our own Padraig said, “Two things about the Campy Deltas, the brake cable had to be trimmed exactly to length and you couldn’t run it through the brake and then trim it because of the way the casing was designed. I tried to measure from the top of the brake to the bottom of the casing and then measuring how deep the housing went into the brake and then subtracting that from the overall length. It was a goat parade.”

Released in 1984, the Delta was the most expensive brake on the market, all the more subversive for the fact it didn’t stop bikes, but if we think about it in purely monetary terms, perhaps what Campy was really doing was saying, “Guys, things are going to get more complicated and much more expensive.” The Delta was the Trojan Horse of high end cycling, an intriguingly beautiful, sculptural piece rolled innocuously into your local bike shop, whereupon it dis-engorged generations of ever pricier, ever more complex componentry. The Campy Delta ransacked your city under cover of darkness, making way for a whole army of expensive bike-a-phernalia to ruin your marriage and your credit rating.

Alternate uses for the Campy Delta brake include: earrings, bottle openers, things to put in a display case.

Campagnolo discontinued these brakes in 1992, which presaged the emergence of eBay and the whole concept of NOS (new old stock), which was probably a clever play that took the already insane retail price of these totems of conspicuous consumption and pushed it through the roof. Was Campagnolo the primary holder of Delta back stock? Probably not, but I like to image the whole story arc of the Delta as a fantastic long con on anyone who owns more than one tin of embrocation and may have learned how to rebuild Sturmey Archer hubs at some point.

As a friend, I’m obliged to tell you that chasing this particular middle-’80s dream and building a bike around Campy C-Record and pair of Deltas is a fine idea, as long as you have really good dental insurance. It’s possible that nostalgia is a disease, best treated with cold compresses and a sharp slap to the face.

Having said that, I am not judging you for embarking on this particular boondoggle, because we all have that something, a Proustian Madeleine, a sled named Rosebud, a Tickle-Me-Elmo. Maybe you have a display case at home with a pyramidal space just dying to be filled.

If so, I recommend you track down a pair of these not-brakes. I found a pair on eBay just now for $450, which is $50 more than they cost in 1986, when bike shops finally got them to sell.