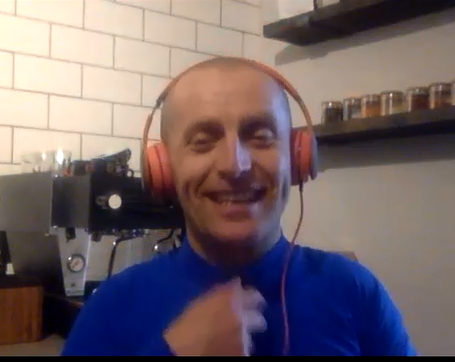 Last week, I had probably one of the most interesting conversations ever about food and cycling.

To say that Alan Murchison, who is a Scottish Michelin Star Chef, is passionate about his work, might be a gross understatement.

On the road for 80 days this year as the chef for the Canyon-SRAM Women’s World Team, Alan Murchison has had to learn about the wide variety of palettes of his 14 riders from 9 different nationalities.

He rises to the occasion with his down-to-earth thinking about food, the people he is serving, and his experience.
He LOVES cycling and he LOVES making food – talk about a win-win!

His new book, The Cycling Chef – Recipes for Getting Lean and Fueling the Machine – offers up not only some great recipes, but the kind of nutritional information that’s also easy to digest.

My second guest is Bruce Hagen. Bruce is the “people’s lawyer” in Atlanta and is immersed in not only helping cyclists in the event of crashes, altercations with law enforcement, and teaching police about the laws around cycling, he also is deeply committed to bicycle advocacy – giving back as much as he can.

Bruce Hagen has a great perspective on cycling and the law. Apparently, he’s also an expert on the Atlanta restaurant scene and in addition to his legal advice, is happy to offer a recommendation about where to eat what in his city.

Practicing his trade for over 30 years though, Bruce has been able to bridge some of the gaps between cyclists, police, and legislature with no illusions as to when things work and when things don’t.