The Angle: Trail and Wheel Flop

When discussing a bicycle’s steering geometry and trail, there’s one other number that people discuss—wheel flop. There’s a fair amount of misinformation about wheel flop on teh interwebz and if I do nothing else, I’d like to dispel the myth that wheel flop is a measure of how far the handlebar drops when the bar is turned 90 degrees. That’s not it at all.

Wheel flop is the distance between the surface of the tire and the point where the imaginary line of the steering axis meets the ground. It’s that simple.

Wheel flop isn’t a number anyone will design a bike around, in part because it tracks with trail. As trail decreases, so does wheel flop, and as it increases, wheel flop increases. A more noticeable influence on wheel flop is head tube angle. The shallower the HTA, the more pronounced the effect of wheel flop. Tire size will also alter wheel flop because wheel size affects wheel flop. The bigger the diameter, the more the flop. 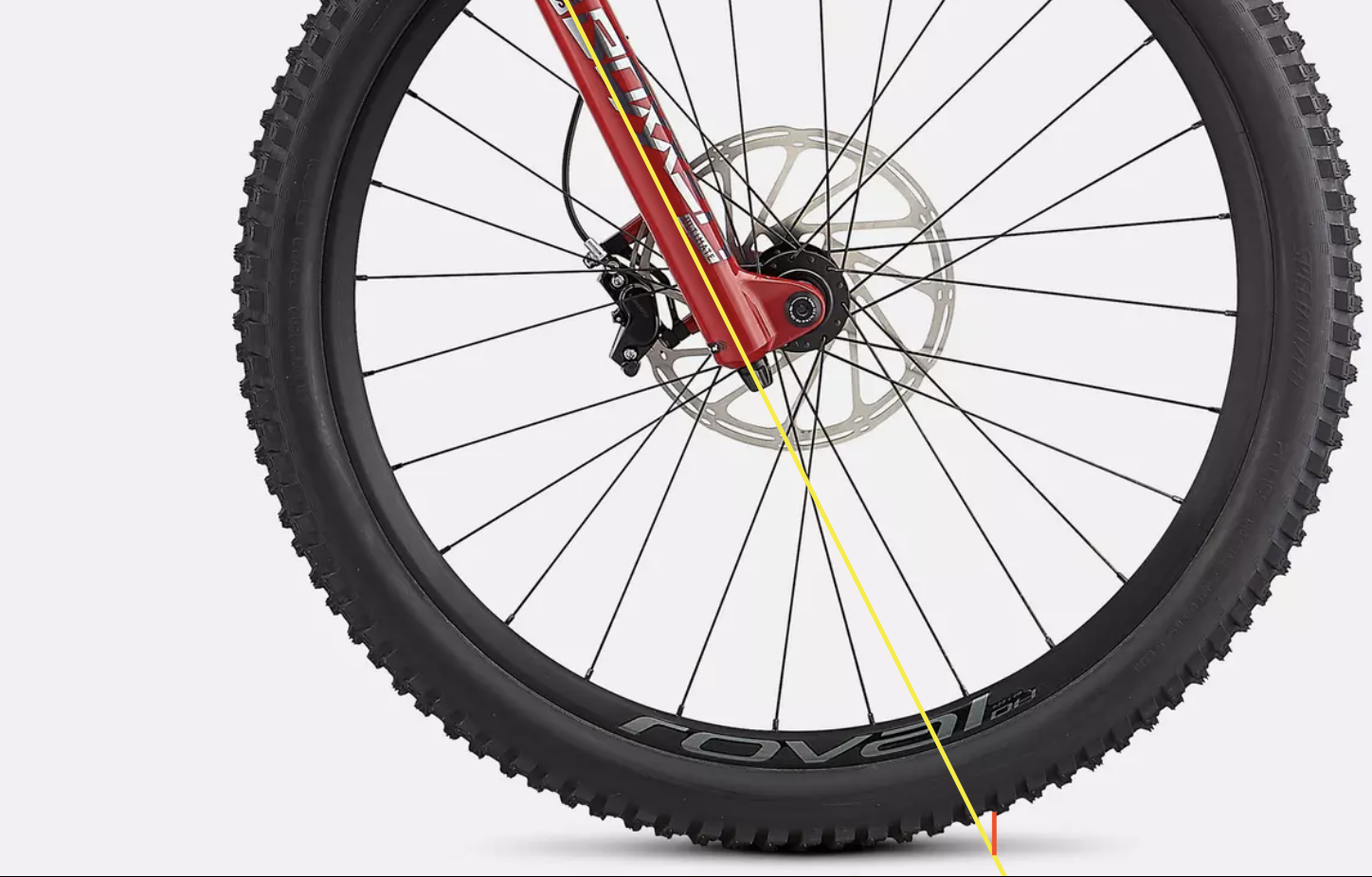 There’s a wrinkle in the relationship between flop and trail, though. While wheel flop will increase as trail increases, it’s not perfectly proportional. Let’s look at two imaginary bikes.

So how does wheel flop affect a bicycle’s handling? Let’s start with an analogy. Imagine driving a school bus and go to make a turn. The bus has lots of mass heading in one direction; changing that direction isn’t easy. If we were to cut the wheel hard, it would likely skid some before rolling over. This would be understeer. Now, imagine we are in a 1960s Volkswagen Beetle. With the engine in back, making a sharp turn could easily result in a spin—too much turn, rather than too little. This is considered oversteer.

A bike with a high degree of wheel flop tracks straight very well and is even resistant to turning initially, but if we turn the bar far enough, the mass of the bicycle and rider will push the front wheel to turn as far as it can because the bike wants to assume the lowest position possible relative to the ground, and that position is with the bar at 90 degrees to the top tube. If you’ve ever hit a bump on a mountain bike ride and had the bar twist out of your hands and you landed in the proverbial heap, wheel flop was probably a factor.

There are a number of pseudo-scientific explanations of wheel flop out there, though there’s one blog out there that drills into the math very well. Click here for the full rabbit hole.

Always with the buts I am.

But wheel flop isn’t a big enough factor in bike handling to worry about unless someone is contemplating a chopper. I don’t know a single engineer or product manager who ever looked at wheel flop before considering trail; bikes are designed around trail and BB drop and anticipated sizing runs. And because it is a result of the combination of HTA, fork rake and wheel size, flop will simply be a result of those other numbers; there’s no way to alter a bike’s design to change wheel flop without altering one of those three numbers.

Put another way, wheel flop is as valuable as cow flop.

The Bikes of the 2021 Chris King Open House

How to Buy a Budget eBike

The Cult of Janus