Shimano’s GRX group has been out for more than a year at this point and I published a detailed review at Red Kite Prayer, which you can find here. So why publish a review here on The Cycling Independent? Simply put, TCI is a different site and our reviews will be a bit different.

GRX was made specifically for gravel bikes and the ways in which it differs from Shimano’s other road groups makes me wonder if Shimano’s priorities haven’t been skewed.

GRX comes in three different variations. All are known as GRX, which might get a little confusing. In terms of quality and cost, they can be thought of thusly: RX810 is a sister to Ultegra, RX600 is parallel to 105 and RX400 is the budget version, akin to Tiagra. 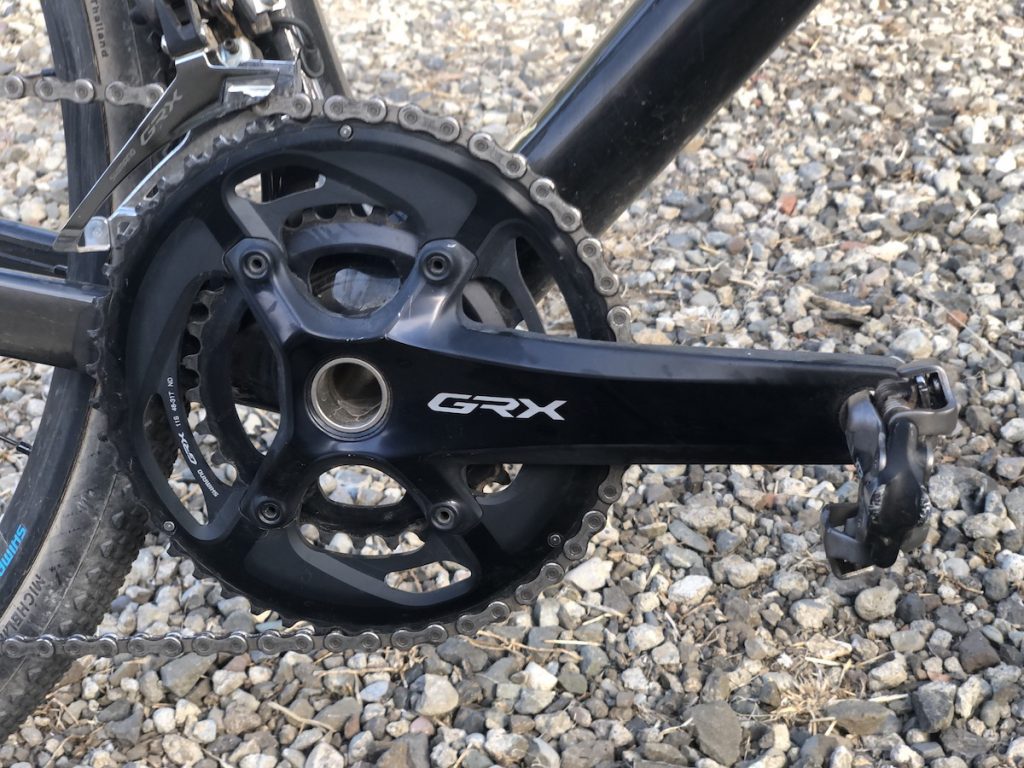 Philosophy
Let me be frank: Cyclists have been way too weight-obsessed for way too long. Did I notice a difference the first time I rode a 17-lb. titanium review bike instead of my 23-lb. steel machine? Yup. Six pounds is a bag of cat litter and then some.

I’ve ridden hundreds of bikes and the bikes I remember, the bikes I miss aren’t the ones that scales largely ignored, but the ones that gave me the best riding experience. I’d rather ride a 16-lb. steel bike that rolls like buttered sourdough tastes than a 14-lb. carbon rig that’s stiffer than a prison sentence.

With GRX, Shimano refocused its priorities. They placed a premium on durability as well as usability. If you ride a gravel bike on dirt roads, you’re going to end up on the ground at some point. It’s important that the bike work in an unperturbed fashion after you climb back on. With GRX, there’s no carbon fiber and none of the little doodads and lightweight aluminum pieces that seemed to disintegrate on contact with the ground. Why is that just now happening?

Also, can someone send a memo to the good folks at Campagnolo? I’ll never buy another carbon fiber derailleur again in my life. 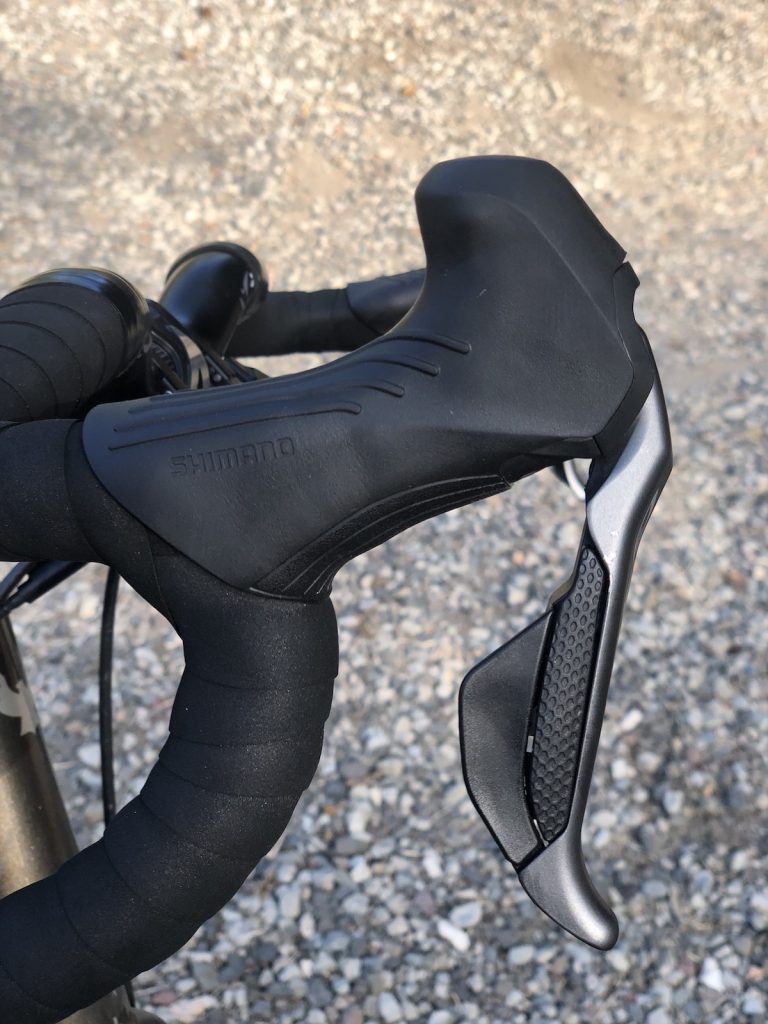 User Interface
I’m tempted to make the case that this is the most ergonimically considered group on the market. There are little details like how Shimano engineers moved the brake lever pivot up to improve leverage for braking from the hoods. They also flattened the front of the lever and gave the lever the same coating they use in some of their fishing products to increase grip. 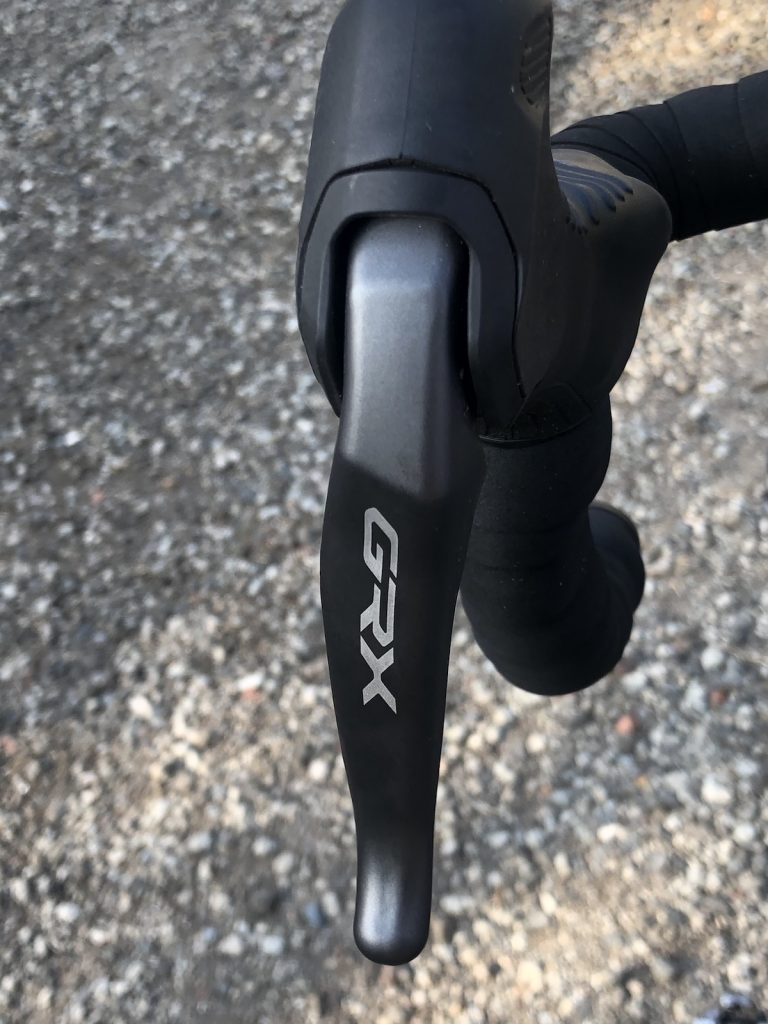 Shimano also gave the lever body a more prominent bump to increase rider confidence that their hands wouldn’t fly off the hoods while riding on a rough road. One of the reasons I fit gravel bikes with a several centimeter higher bar position is that, traditionally, I don’t ride the hoods when I’m on dirt. I stay in the drops and if I’m going to be in the drops for an hour at a time, my back and neck get a line-item veto on bar height. With GRX, I can cross the beams of hoods and dirt.

Together, these little changes mean that riding and braking from the hoods doesn’t feel foolhardy when I’m on dirt. 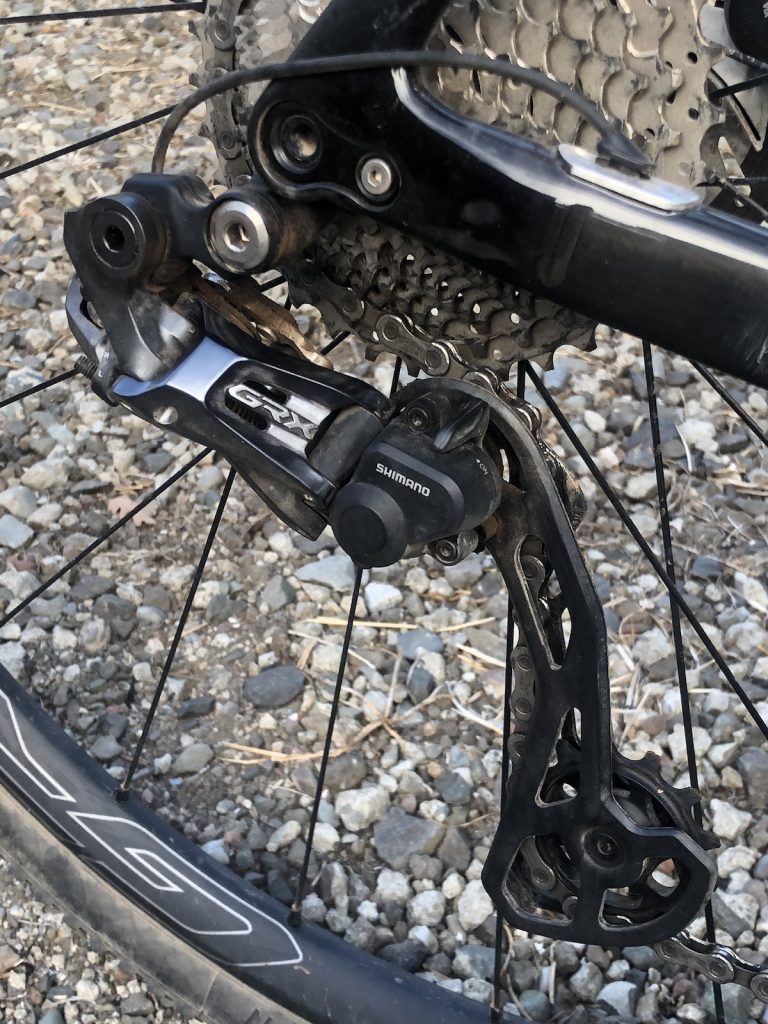 Drivetrain
GRX’s two upper tiers, RX810 and RX600 feature 11-speed drivetrains with both both 1x and 2x cranks, while the RX400 is 10-speed and 2x. The RX600 and RX400 2x editions offers one of the lowest stock gears of any group meant for drop bar bikes, thanks to the 30×34 combination. In addition to the RX810 mechanical group, Shimano also offers RX815, a Di2 group.

While I get the attraction of 1x, at nearly every turn I think that 2x is still superior. The “advantages” of 1x are rather suspect to my eye. The weight loss really doesn’t amount to much and the problems a front derailleur cause in terms of shifting performance and confusion of just which lever does what can be solved with one good mechanic and 10 minutes of education.

The downsides to 1x are significantly increased drivetrain drag, which is to say, anyone who is concerned about finding a lube that can save them 2 watts would do well to avoid a drivetrain that will add an order magnitude more drag. Then there’s the fact that with 1x you lose gearing at both the high end and the low end and those wide-range cassettes can be a nightmare on roads where the gradient may change by a single percent here or there. Wide-range cassettes are most useful when the gradients come in a wide range as well.

I’ve encountered rear derailleurs with a clutch that only worked right under such high tension that they increased drivetrain drag; that’s not the case here, which is nice because having your chain slap a carbon fiber chainstay isn’t dynamite.

Shifting performance is so good I don’t hesitate to upshift the front or the rear under full power; is there better praise for a drivetrain? 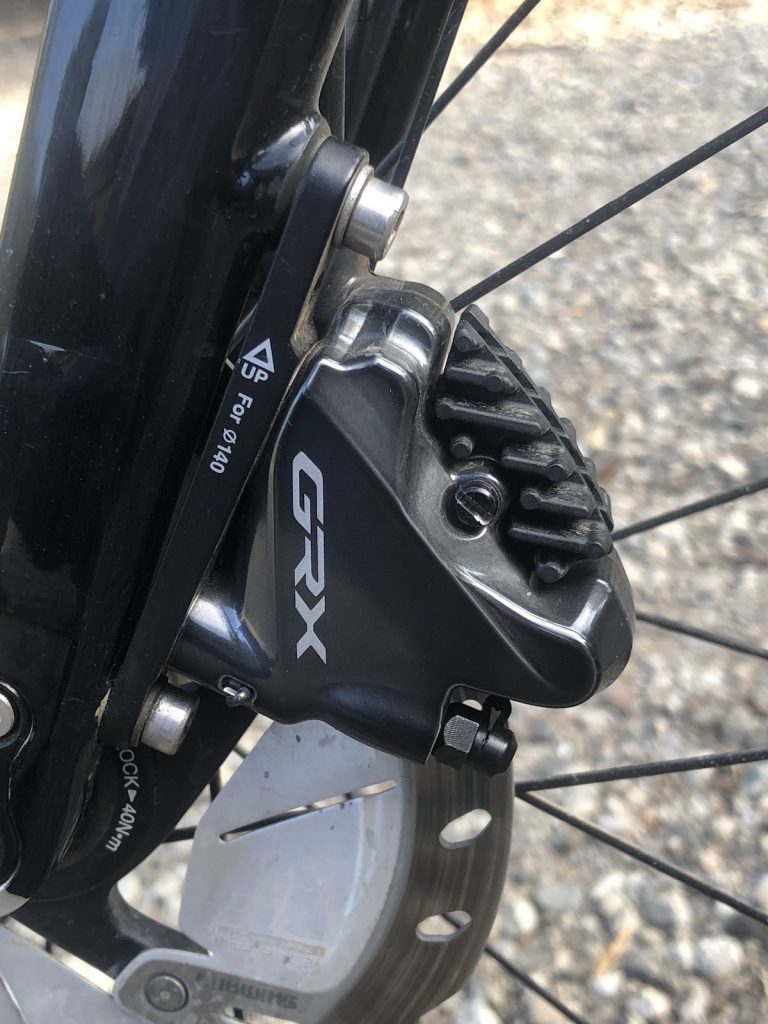 Brakes
The flat-mount disc brakes of the GRX group are elegant in a way that early road disc brake calipers were not. No one wants an ugly bike. In the same vein, the fact that even a relatively big rider can run 140mm rotors and still stop is a testament to just how good Shimano’s engineering is. I don’t have any trouble getting enough braking power out of these stoppers. In fact, locking up the rear wheel into a skid has happened more than a few times on a steep descent. Fortunately, they modulate well, so releasing the brake enough to allow the rear wheel to roll again isn’t hard.

Disc brakes do require more maintenance than traditional rim calipers. I replace brake pads more often and I need to bleed my brakes at least once per year. With GRX, Shimano has created the easiest-to-bleed system I’ve encountered. Even people who have forsworn learning how to bleed their own brakes can learn how in an hour and get it right the first time. 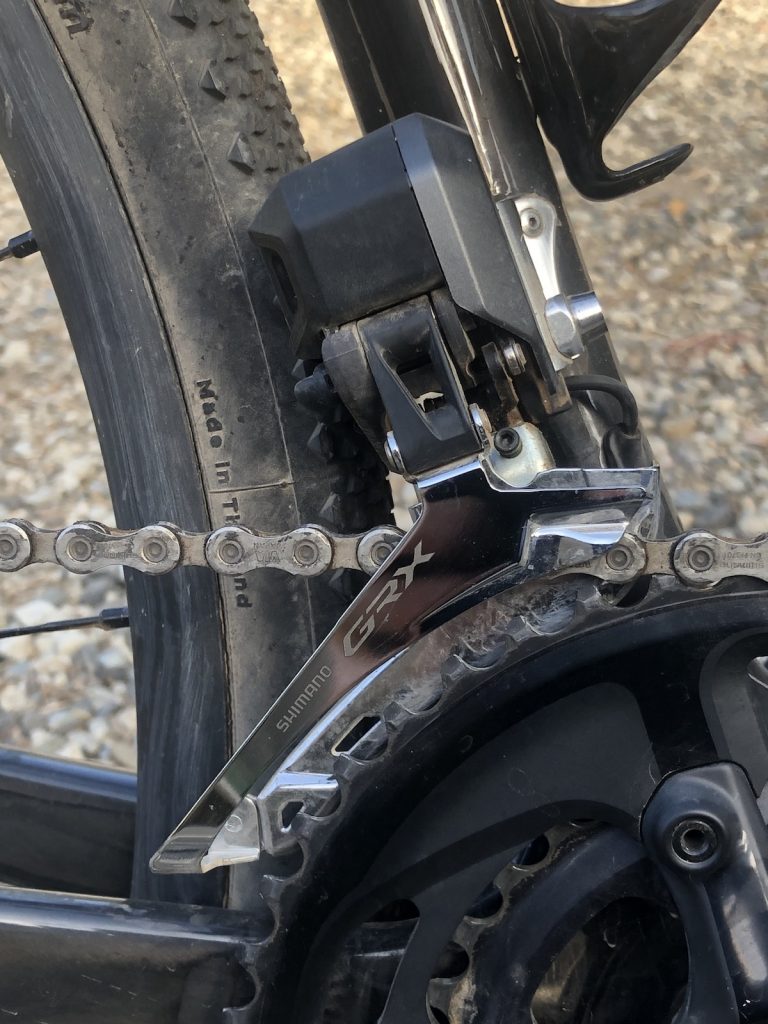 Wild Cards
The product development team at Shimano really investigated the gravel world and listened to riders as they worked on this group. That is evident in two of the products they offer with GRX: inline brake levers and a dropper post.

The inline levers are an indication that they know this group will be used by cyclocross racers, which just makes good sense (see: durability and off-road use). The inline levers permit braking from the bar tops which will be appreciated by anyone negotiating technical terrain, but honestly, they will be pretty awesome to newer riders who buy a bike spec’d with the group.

The dropper post is unlikely to make all that much sense for anyone who hasn’t been riding mountain bikes in the last 10 years. It also might not make much sense to someone living in, say, Nebraska, but here in Northern California a dropper post on a gravel bike is tantamount to a get-out-of-jail card. Until now, it’s been hard to find droppers in the seatpost diameter most common to road and gravel bikes, but with Shimano’s distribution reach and the fact that they make this in both an internal cable and an external cable version is likely to result in a great many more people running droppers on their gravel bikes.

Drawbacks
I’ll say that I don’t understand why Shimano doesn’t offer the RX810 crank in a 46/30 combination; I’d prefer that to the 48/31; that 17-tooth jump requires a lot of rear shifting following any front shifting. And while I know how this is going to sound, I’d like to see them offer a cassette or two with lower gearing options, like how about a 12-36?

If I’m to be critical, that’s it, and I’m fully aware that such a criticism is geographically based. No one is Florida has this complaint.

Bucks, Sawed
Pricing on GRX groups reflects a clear lack of carbon fiber or titanium. Thank heaven. Save that stuff for frames.

My experience with the RX815 Di2 group is truly stellar. It has never missed a shift and I have never overcooked a turn. This may well be my favorite group on the market.

Final thought: I want more groups that place reliability, usability and durability ahead of weight.

Shimano RX8 Gravel Shoes: We Get It