Editor’s Letter: A Broken Bike And Other Musings

I mean really, I broke my bike while Zwifting?

Sure I’ve broken one or two in my time, but it’s weird because I’m small and not a cottage of wattage by any means. One was a custom-painted day-glo green Pinarello Prince that for still unexplained reasons after seasons of use (it was my favorite bike ever) the chain decided to hop off the cassette on a long bumpy descent and when I went to pedal the driveside chainstay snapped in half. I remember it well; I didn’t crash somehow and my good friend Chad, owner of South Mountain Cycle & Café, left his shop and came to pick me up in his mini van.

“That sucks dude” he piped. “But the good news is I have a cooler full of beer back there just for you on the drive back to town.”

And then there was the Cannondale Scalpel, the bike I rode at the Leadville 100. Once back home after a local ride I sorta pushed it backwards with the rear disc brake on to hoist up the front wheel: boom the brake caliper mount snapped clean off the carbon fiber chainstay. End of that bike’s lifetime. I will admit, it was one of the original ones with 26″ wheels, flimsy light and perhaps too flimsy light.

But Zwifting? OK, maybe the bike was due. It is (was) a 2013 Cannondale Super-X prototype that saw a lot of miles across the eastern Pennsylvania landscape including an event called Crazy Train, among others of the same style and nomenclature, consisting of questionable “gravel” events with odd behavior before gravel was officially a thing. I still think Pennsylvania created “gravel” riding if truth be told. If I can even remember those rides.

At its peak the Super-X  was the bike I rode at the DK 200 about seven years ago. I even made it road race worthy (just put some 700C x 25mm road slicks was all it took since all my drop bar bikes have essentially the same long-stem position) and rode it weekly at The Derby (Emmaus, Pennsylvania’s version of Sunday Worlds, as they’re commonly known across the nation) marking myself as one of the first to have disc brakes on the road even if it was a ‘cross bike. Then somewhere along the line it was reduced to a Zwifting bike, permanently locked onto my Wahoo Kickr right after I broke my hand in 2016 on an icy mountain bike ride.

It led a great life of new beginnings after that, hard efforts, being ignored and then called upon again. Then it happened. I know better, I’ve got 25 years under my chamois but on the big climb in a virtual setting I shifted from the little ring on a “fake” 12-percent grade to the big ring to catch an avatar rider from maybe Zimbabwe that I’ll never know nor ever meet in person.

Calamity. A wild upshift ripped the front derailleur right off. Pulled the thing right off the seat tube and into the big chainring with a loud crack of rivets failing and ripping out of carbon, a metal grind of derailleur meets chainring mixed with the squeal of a protesting chain. It sounded like the end of a Slayer concert as they walked off stage for the last time, yet I was listening to Venom as it happened. Add in the squealing of the cable being ripped out, sounding like a Steel Panther guitar solo on eternal sustain.

I probably deserved what I got.

Some cussing and stomping ensued but I didn’t throw anything (yes, I’ve been know to throw a bike or two in the long gone past when I raced for real). I simply went inside and called it a DNF. A virtual DNF as it were. Of course the commentators had plenty to say:

“Did the virtual team car drop off another bike for you?”

“Dude, did you crash? What’s the other guy look like? Man that virtual stuff is getting real!”

“If Zwift did that to your bike imagine what Sufferfest will do.”

The thing is,  I made a few adjustments and got back at it a few days later. OK I put a whole different bike on my Kickr. It’s a pretty class act bike that was waiting for a new life and still fits me perfect. And believe me, it will get some going in the next few weeks before the roads in my home town dry out and winter turns to spring. 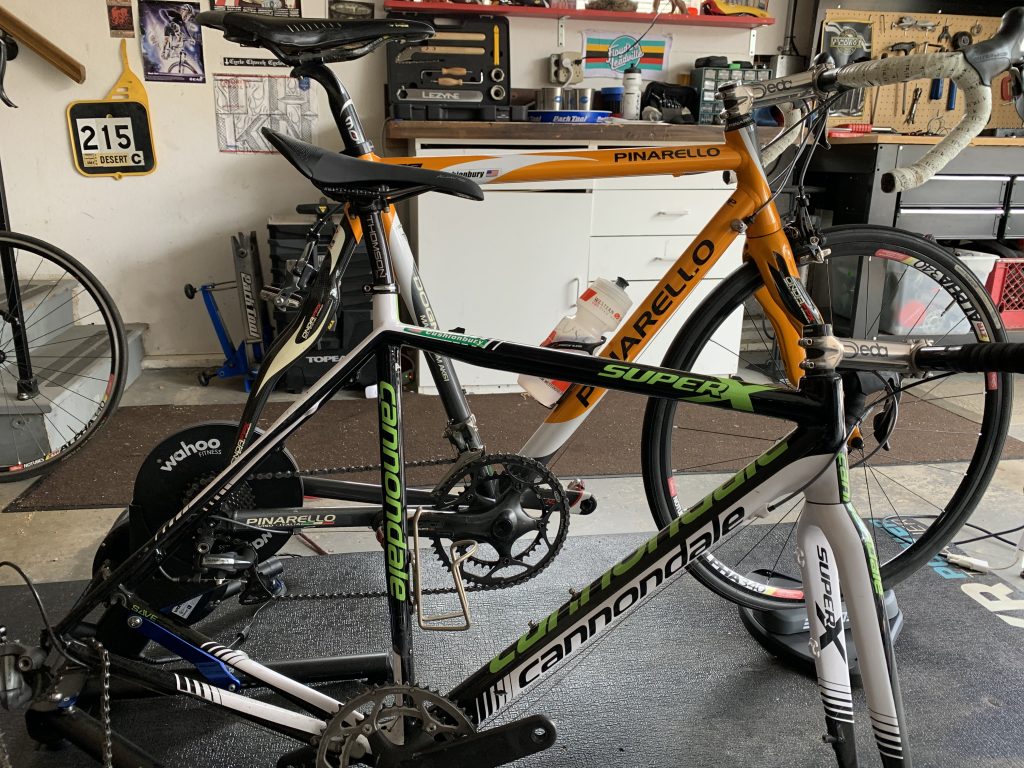 My point? I don’t have one really. Well, maybe just a small one. As we move into this new year grab life by the handlebars and go after that next adventure even when everything seems (or is) broken, there’s always a fix before you do that big bike toss. Now is the time to get outdoors, alone, in a small compact group or whatever with whomever who feel comfortable with. This is the year of cycling, running, hiking, rock climbing, whatever. Enjoy it, and please take the The Cycling Independent along with you. We want you to join us and we want to join you because this year I’m sure there will be a cooler full of beer (or soda) waiting when you need it most.

Just try and not break your bike while Zwifting. It might be a bit loud.

The best sort of ‘independence’ is independent wealth. Since we don’t have that, in order to maintain our independence from the undue influence of advertisers and would-be ‘influencers,’ we need you to subscribe. For the price of a latte per month, you can keep us rolling.

As a high school kid Cush loved the news, religiously turning on the TV at 5 p.m. for the latest updates after reading The Los Angeles Times that morning. This led to a BA in Journalism from CSUF (he wanted to be a TV news anchor). And then came motorcycles and bicycles—he joined the cycling media straight out of college and never looked back, working for top publications and brands ever since. As a long-time racer, when he earned a Pro license, he realized he was way too slow and now just rides around enjoying beer stops and scenic overlooks as much as possible in Prescott, Arizona. Favorites: drink of choice: vodka/tonic; beer: Elysian Space Dust; music: any and all heavy metal; comedy: Tater Salad; fiction: Bret Easton Ellis; pet: Easter the Pussycat.