He’s called Retro Rick, but I have a few new nick-names for him after a recent ride. Rick “It’s not as steep or a long as it looks (steeper and longer actually).” Rick “Top is just right up there.” I’ve got some others that are not printable in such a civilized forum.

We’ve known and ridden and raced together for almost 50 years, so really, I should know better, but then, I ride a bicycle for fun which is considered by most people to be a very questionable pursuit. Fun riding with Rick these days usually includes quite a bit of unpavement and since he currently lives in the California gold country foothills it means any ride has some serious up and down with few breaks. Since I had to come down to the area to do my yearly wine bottling stint in a small wine group we are both in it made sense to spend a few extra days and do some rides. I’m actually riding a bit  at the moment. As another friend says, we are, “Almost 2,000 kilometers away from being mildly fit,” so I figured we could tackle a bit of the old up and down and I know some of the roads.

Rick is great to ride with. He never leaves anyone behind. If you want to go hard he’s there. Change things up, no problem. His being a retired geologist you can get a minor degree in geology from riding with him. However, ride descriptions from him are notoriously optimistic. I know much of the ride he proposed, just, “A little bit more on a different road,” and the initial 2 hours he promised turned into 70 miles by the time the ride started. He had also, “Done the same ride a few weeks before no problem.” 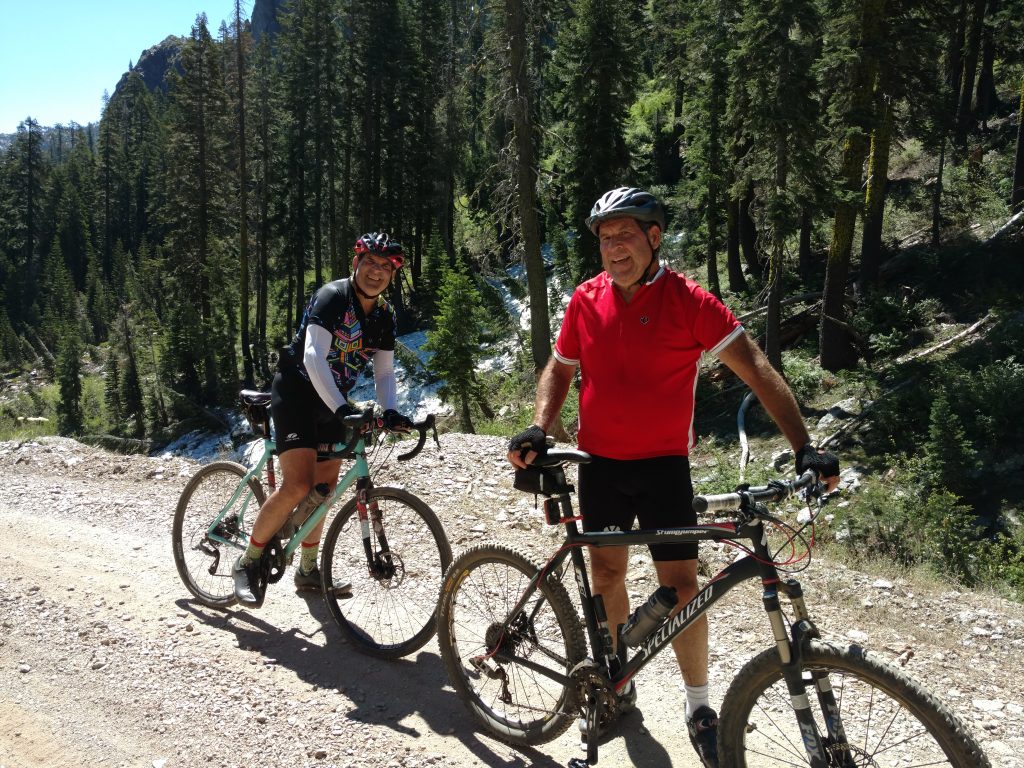 So, giant bidons full with water stops known and noted we headed out early as it was going to be hot. Where I live it slides into hot as the morning progresses. Where Rick lives the temperature went from pleasantly cool to second level of Dante’s Inferno long before we reached the bottom of the infamous Yankee Jims dirt descent. Not a problem, riding well and no issues—a beautiful day on the bike. But down in those narrow river canyons any breeze disappears and the canyon walls reflect the heat back and forth toasting anything and everything. After a couple of triple-digit dirt sections, conditions started to sour for me.

When you are racing bicycles and someone starts to hurt on a climb you can observe it in various ways. The first signal is their inability to talk anymore and moves into changes in pedal stroke, need for more water, head bobbing and so on. When I did compete I got really good in observing this and timing attacks on long climbs. Attacking a rider in crisis will destroy them and that’s better than just dropping them and letting them chase at their own pace. When they really crack big time I liked to joke that you could see his oil light on the handlebars light up. It’s happened to all of us, and when really hammered it hits you like a ton of bricks got dropped on you.

Well, thanks to Rick, I experienced a new feeling that I have named “THE TILT.” I mean the tilt like in pinball when you screw up big time and it’s game over. Call it the rescue ride of shame. Get off and sit down and then walk a bit then sit some more.  I went TILT on that ride and only once before have I ever felt that onset, which is heat exhaustion. I had water, not bonking, plenty of power, pocket with food, all systems go and then the heat just got to be too much. TILT. If there had been water I would have just laid down in it, but those canyons, so pretty in spring, were not obliging. We’d passed over the river hours before and the climbing was non-stop in that heat and despite getting close to a lake my body said stop. NOW. 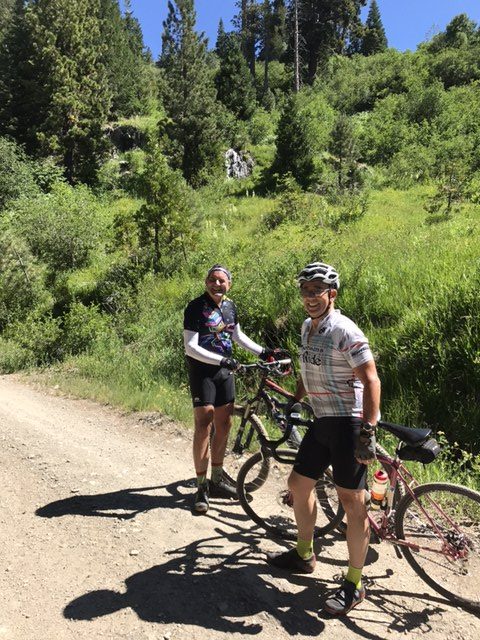 With our intrepid author.

The signs were clear. If you do not know the signs of heat exhaustion learn them because if you keep going you can really hurt yourself. I had no other reasons to feel so bad, but I felt a stomach upset and slight dizziness and just couldn’t cool down so I stopped to rest. That big, red TILT sign lit up in my brain and I was able to get it under control; after a rest I was able to get over the last part of the hill, call for rescue, and head to a lake to cool down while waiting. It was just too hot for my core to cool down and people can die from that if they are not careful. I was fortunate it happened before I was really depleted in other ways so recovery was quick (thank you once again, beer). Once before in my life it happened to me at the end of the ride and I pushed myself too hard without paying attention to the signs. It took a couple of weeks to recover. I was really sick. This time stopping and then easing over the top and tuning out Ricks exhortations “Don’t worry it just looks like 15 percent” (it’s actually steeper).

It’s hard for those who ride a great deal to know when to fold and not just do that last hard bit even harder. As we “mature” we need to pay attention to signs from the brain and try to use our experience so we can still enjoy the sport we love. Oh – and one last bit—turned out that same ride he did a few weeks before no problem he had to call for pickup just a few miles further along then we did on our ride, which, of course, I found out in the car on the way back.

George Mount has always ridden and loved bicycles. From “borrowing” his sisters 3-speed to ride to his Grandpas place where he was taught to put condensed milk in tubes to defeat thorns, to the top levels of professional cycling in Europe, bicycles and riding them have always been a major passion in his life. Despite a 10-year competitive racing career which rocketed him to the Olympic Games and off to Europe, he has always had respect and fascination for all human-powered two-wheeled objects. He worked for many years in Tech as an Engineering Program Manager specializing in communications and test products. He jumped off that bus and is now living in the woods in Southern Oregon. He plies the forest service backroads and byways on various bikes found in his garage. He currently is Vice President of the US Bicycling Hall of Fame non-profit and runs the nomination committee.