Back in the Saddle Again

If you ride, you crash. This we know. Last year alone I had three bad ones. You know the kind I mean. Not just “managed exits” that leave your friends laughing and hoping the GoPro was on, but the sorts of crashes that make you wonder if you should hang up your helmet.

My last mountain biking crash was the worst: a spread-eagle landing into a slope of fist-sized rocks. It was easy to figure out what I’d done wrong and the bruises healed with time, but it was much less simple to step back into my old confidence. I started balking at drops or steeps that I would have grinned at a year before. The self-talk wasn’t good either: Maybe I’m getting too old for this. Maybe I should just ride on the road. Maybe I should learn to love a less hazardous sport, like synchronized swimming or chess. I didn’t want to admit it, but mountain biking wasn’t fun any more. It was scary. And the more afraid I was, the more tension I brought to my riding, and more tension increased my chances of crashing. Fear, self-recrimination, stress, fear—What is the matter with you! You can DO this! I didn’t want to quit, but I needed to break the loop.

Some of us break the loop by stepping away altogether. Sometimes we just KNOW it’s time to hang it up, like how I knew I wasn’t going to ride motorcycles again after my sister-in-law was killed when an SUV struck her Yamaha. But sometimes we’re just as sure that we have to keep riding, like how my nephew kept riding motorcycles after that tragedy, in spite of people who said it was an irresponsible decision. For him, it was a way to stay connected with his mom and manage his fear. Our divergent decisions were visceral, not wholly rational, and visceral decisions are difficult to explain. Last summer after my crashes, my gut told me I needed to stick with mountain bikes. But how?

For me, the torment ended through private coaching sessions with a pro. I expected and wanted a critique of my form, but what he gave me was an invaluable reminder of what matters. He said, “Let’s just ride bikes. At any point you stop having fun, pull the brakes and we’ll talk it through.” There was more to his coaching, but this wisdom was at the core of everything. “Are you still having fun?” The question relaxed me, and more than that, it cut through my self-talk and fear. At the end of our time, I was taking loose corners and drops if not exactly confidently, at least cheerfully. 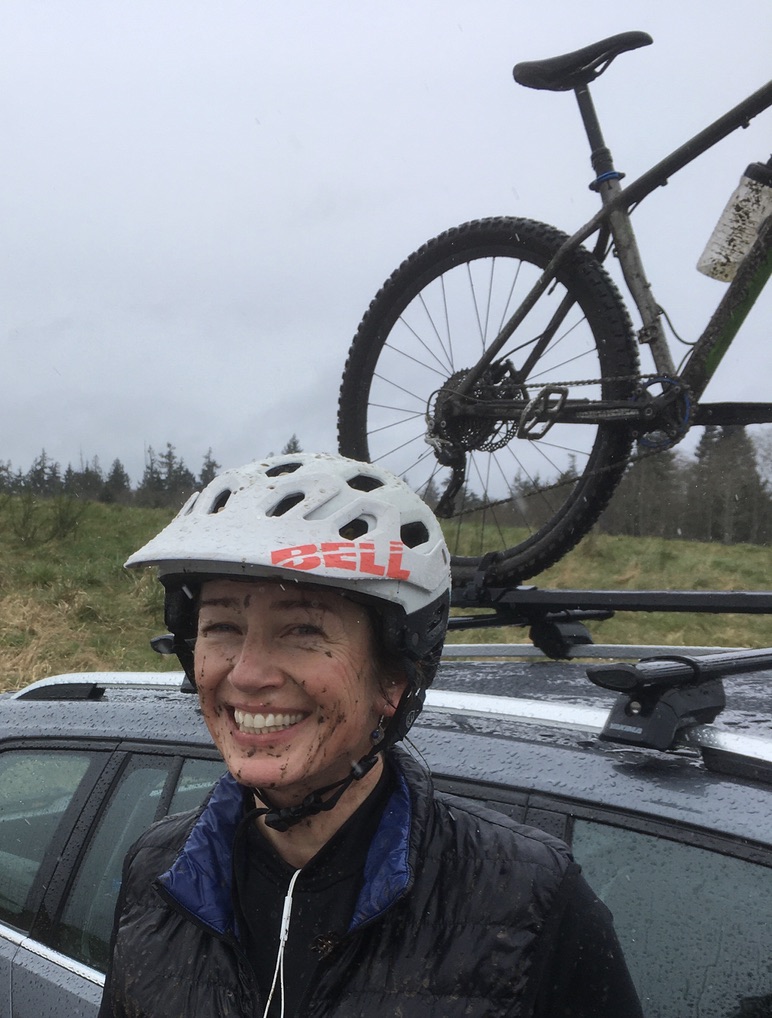 Obviously, private lessons aren’t the only way to make a comeback, if that’s what you determine to do. Friends have switched riding partners, switched bikes, switched locations, even switched sports for a while.

In 2021 I switched shirts. Races reopened and I entered a regional weekend MTB series, keeping the joy alive by ditching brand jerseys for concert tees. I created big-hair playlists, taping cheap headphones to my ears to keep out the dirt and keep in the goodness. Bonus discovery: the 1980s are a gold mine of songs about racing, like Judas Priest’s “Hell Bent for Leather,” Riot’s “Road Racin’” and Van Halen’s “Panama.” That last one is about fast cars or maybe about fast women—it’s tough to tell, but I’ll take either.

At the starting line of a mid-season event, the race marshal yelled something at me I couldn’t hear through the Motörhead. Sorry, what? “You gonna bring a smile that big across the finish line?” THAT, friend, is the point.

Julie leads a double life in Washington State: high-school English teacher by day, cyclist by night. She makes mixtapes for both realities. Her teaching persona appreciates Greek poetry and a judicious use of semicolons. Her cycling persona coaches with Evergreen Mountain Bike Alliance and a local high school racing team. Each summer the personae fuse for some solo touring, an attempt to see the West by bike before it's gone or she's gone. These ventures usually involve memorizing poems. She plans to ride bikes long after she can't walk.

Soak your lungs with wine, for now
The Dog Star's at the turn.
How the summer wounds, and how
All must thirst and burn. --Alcaeus

Robot’s Useless Reviews – The Tip of the Saddle